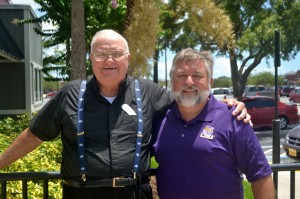 Today, was a great day.

We left the house in Ft. Myers to travel to Seminole, Florida to go to 11:30am mass at St. Justin Martyr Church. My freshman homeroom and algebra teacher from Bishop Turner High School, was saying the mass. I have not seen him since I graduated in 1978. Father Richard Cahill was one of the reasons that I decided to get a degree in Mathematics. He taught algebra in a problem solving way and challenged the students with other problems for monetary reward. It instilled a love for math, even to this day.

After mass, we took him out to Red Lobster and talked for hours about his life after Turner and what I did with my life. He’s been in the Clearwater area for about ten years. He moved here to take care of his mother, who died a couple of years ago at the age of 99. He still has an Uncle in a monastery in George who is 102. I can see Fr. Cahill may be around for a number of years. I was surprised to hear that I was the first former student to visit him. Now that people know where he can be found, many more may show up.

After lunch, Marge and I when to the beach at Indian Rocks Beach in Clearwater. I wondered why they named it that. We did not see any rocks along the beach. It was nice to cool off in the water. A little rain came down, then formed into a thunderstorm far out in the Gulf. The time difference between the lightning strikes and thunder were over 30 seconds. We saw some more storms building so we decided to head home. 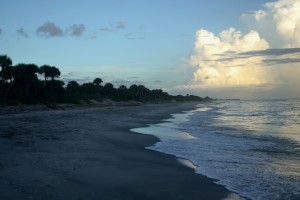 We took a detour to Caspersen Beach in Venice, Florida. This area is suppose to be one of the best places to find fossilized sharks teeth. We saw a people sifting through the sands, but we did not find any. We plan to go back to do our own search with snorkel and shovel in hand.

It is a lovely beach with a lot of wild life, we saw at least 50 turtle nests marked off on the beach as well as crabs scampering around, birds hunting for food, and baby shells burying themselves back into the sands when the waves lapped onto the beach exposing them to the prey. We have to get back there and spend more time.